It's been a tough but productive few days. Tumi now shines hull and topsides after a lot of effort and elbow grease has gone into removing the UV oxidisation, salt deposits and grime of 8 months at sea. We'd planned on paying someone to do it but a combination of no-one being available and the other costs we're incurring resulted in us tackling it ourselves ... and hating every minute of it!! At least it's now done and (quite literally) dusted!

After a full day's labour on Saturday we walked along the riverside trail to Burnett Heads on the lookout for more kangaroos and were rewarded with a whole 'bounce' of them, or whatever the collective noun is. The same big male (we think) and his harem and young. They're quite ungainly moving around slowly but their motion at speed is far more streamlined. 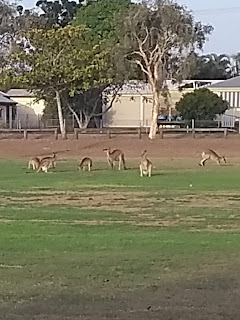 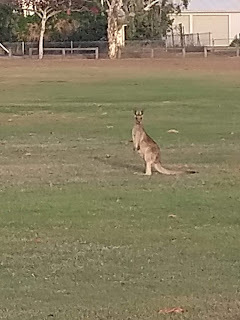 Burnett Heads is a nice little place with wide streets and houses dating from the late 19th century overlooking the ocean. As with everywhere we have visited in Australia so far it is well cared for and litter free, amazing really. There's a lighthouse on Burnett Head, a modern affair, but the old one erected in 1873 graces kangaroo park, an old wooden affair that did service on Fraser Island, just down the coast, before being shipped and reassembled here. 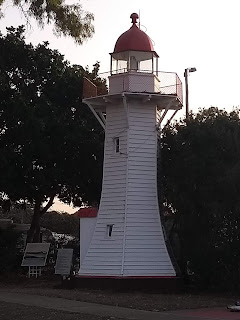 We're off into Bundaberg again this morning and keeping our fingers crossed that the spare parts for the heat exchanger in the engine arrive and can be fitted today. Having got the jobs done that needed doing we're keen to continue on our journey south, next stop Fraser Island, the world's biggest sand island and home to dingoes and myriad birdlife. Typically after a week of winds from the north, when we need them they're switching back to the southeast and increasing in strength. If we don't get away late today we'll have to ride it out until the end of the week at the marina, but will hire a car to explore the area so not all is lost!

PS ... the collective noun for kangaroos is apparently a troop or a mob. We'll stick with a mob!