Since getting the spare parts fitted and the engine reassembled late on Monday afternoon the weather has rather conspired against our continued journey south with weather warnings for strong winds and big seas (apparently 6 metre seas and 40 knots off the coast of New South Wales) so we made the sensible if reluctant decision to wait it out in Bundaberg for a few more days. So Tuesday saw us complete a few small jobs (replacing Velcro, knobs on the stove, bimini straps etc etc) but we decided that was enough work so early Wednesday morning we caught the local bus out to Bargara, a seaside town about 15km down the coast from here. Yet again it was a cloudless blue sky but the strong south-easterlies made it feel rather cool.

Bargara was (is?) lovely. A stylish seaside community with a beautiful promenade, pretty beaches and a charming village centre, it stretches along a beautiful length of coastline and, as we are finding everywhere, is pristinely maintained. 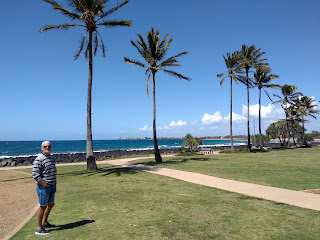 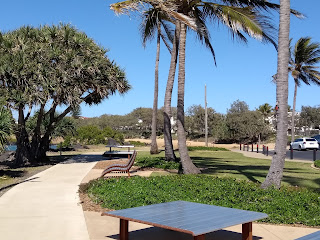 After a short walk along the beach we enjoyed lunch in a pavement cafe watching the world go by. 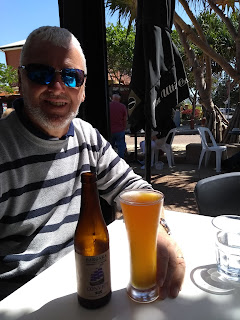 Our plan at that stage was to depart the marina today and, with a few things to get ready, we caught an early afternoon bus back to prepare for a daybreak departure. As is so often the case, however, the weather forecast had changed and Thursday no longer was tenable (still strong south-easterlies) so we hurried back for nothing!

In the absence of a day at sea we hopped back on the Bargara bus this morning to spend a little bit more time in this lovely place. It's been around since the late 19th century when slaves brought from the Micronesian Islands to work on local farms built a swimming basin off the beach where they could bathe without fear of shark attach. The basin is still in use today with a plaque commemorating the 'blackbirds' as the workers were known. Unlike in the Caribbean, wages were established for the blackbirds at an early stage and they were all given paid passage back to their home islands after three years hard toil. Still a form of slavery but better than elsewhere in the world. 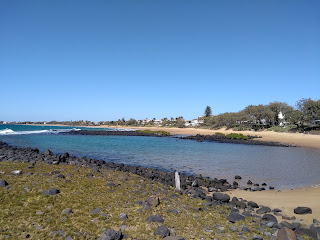 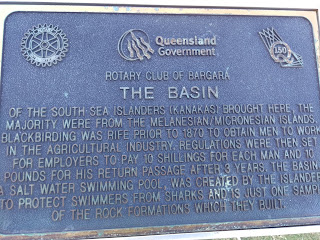 There's a 14km long coastal pathway between Bargara and Port Bundaberg Marina and that was our objective for today. We did however get sidetracked talking to a couple we met yesterday, and also viewing an ocean view apartment, and so by the time we were ready to set out it was lunch time. Now one thing we've noticed about Australians, besides how neat and tidy everything seems to be, is that they love their pies ... pies of all flavours seem to be the order of the day and so we both indulged in a good carb-fest to prepare us for the hike. Sitting on the promenade with perfect ocean views, pie in hand, it was all very nice indeed!! 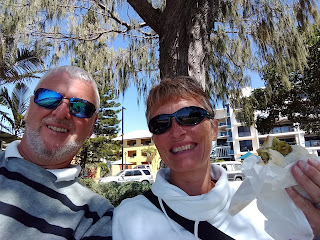 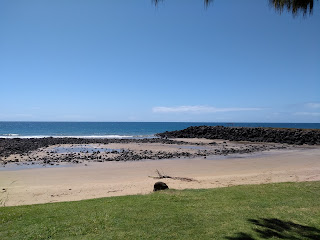 Suitably fortified we put our best foot forward and headed north along the shore. A kilometre later brought us to Nielsen Park, a community park for over a hundred years. From 1912 to 1972, interrupted for a few years by the World Wars, the park was the venue for Railway Picnics, an annual get together for railway workers and their families when steam trains brought them to the seaside for the day. One year in the 1920s 15,000 people descended on the then small fishing village! 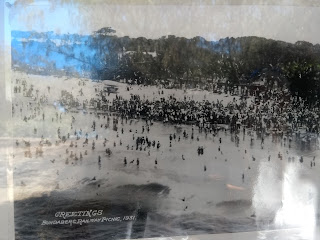 Leaving the park and the outskirts of Bargara behind we headed into dry rainforest and wetlands (although dried up ... Queensland is suffering from one of the worst droughts in many years with myriad wild fires ablaze) with just kangaroos and birds for company. It's funny, but rather like the sealions in the Galapagos, once you've seen a few in the wild they become rather ten a penny!

The trail made its way along the beach at Mon Repos which, between November and March, is famous for nesting turtles. As it was we had it to ourselves ... well with the possible exception of one stone-age crocodile!! 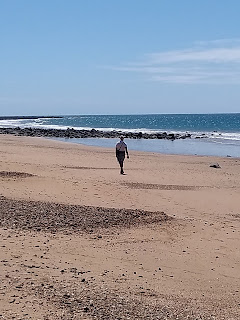 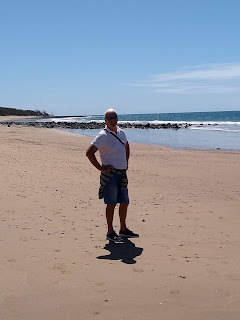 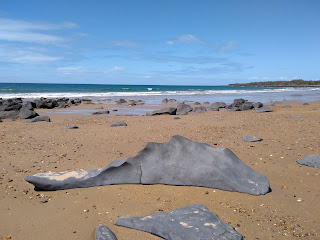 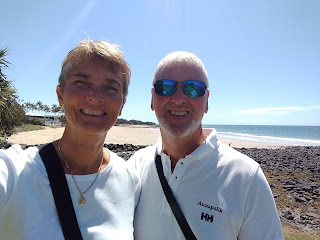 14km later we made it back to the boat, weary but having had a great walk along this stunning coastline. Early tomorrow morning, just after daybreak, we'll wave goodbye to the area for now and head on down to Fraser Island.