After 11 months in the middle of nowhere much of the time we're back in a big city, surrounded by skyscrapers, cafes and bars, heritage buildings and a vibrant atmosphere. Yes we're in Queensland's first city and one of Australia's top three after Sydney and Melbourne. 2.5 million people live in booming Brizzy, centred around the Brisbane River which winds inland from Moreton Bay. Good old Captain Cook sailed by and named the bay back in 1770 but the river itself wasn't discovered until 1823 when it was named after the then Governor of New South Wales. A number of indigenous tribes inhabited the area but they lost their lands to the European invasion.

In fact the first settlement was actually a penal settlement for Sydney's more recalcitrant convicts, the prisoners labouring in the heat with inadequate water supplies and hostility from the displaced local Aboriginal population, to establish the colony. The penal colony was abandoned in 1839 and the area thrown open to free settlers in 1842. By the time Brisbane separated from NSW in 1859, 6,000 people lived here and huge wealth flowed in from gold-mining enterprises and grandiose buildings were erected, many of which remain today.

The impressive City Hall, built out of local sandstone and marble imported from Belgium, and completed in 1930, cost nearly one million (Australian) pounds. Built on swampland, the location came back to bite the city as the foundations sank into the ground over a period of 70 years. 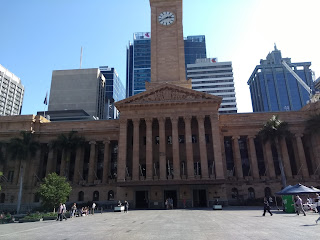 Major renovations took place early in the 21st century to successfully stabilise the building. The clock tower, 93 metres high, was the tallest building in the area until the mid 1960s but the high risers now completely dominate it and other Victorian era buildings. In its day the clock could be heard many kilometres away and people from the suburbs apparently used to pull out their binoculars to check the time! The view from the clock tour over the central business district was fabulous. 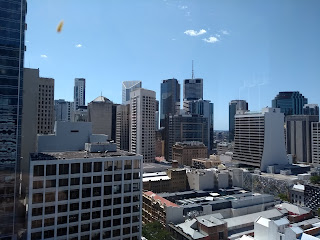 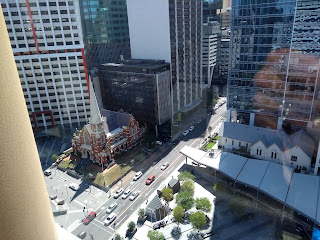 There are a surprising number of heritage buildings in the downtown area, the old central station, post office, Governor's House, Treasury Building and Parliament building to name a few. While they are now valued and preserved, an equal number have been demolished to make way for the skyscrapers that line the riverbank. 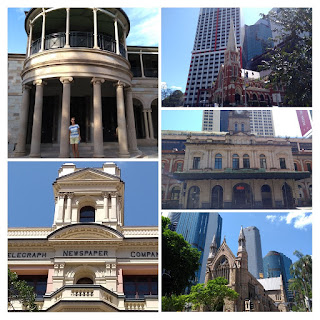 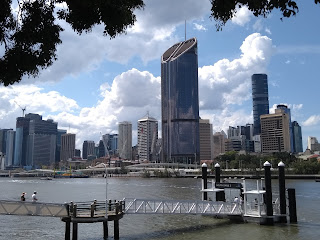 As with many cities you end up walking miles and miles, and that's certainly been the case for us. This morning we followed the Heritage Trail that took us from the city to the Botanical gardens and then across the river to the Southbank, a beautiful strip of green parklands lining the river and home to concert and theatre venues, museums and libraries, and even Brizzy's equivalent to the London Eye. In fact the whole area is reminiscent of London's south bank. 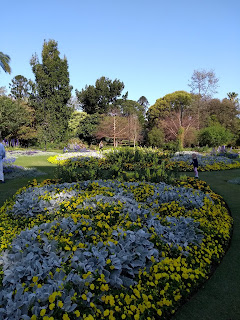 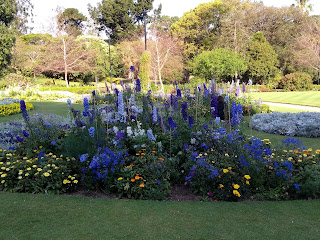 Enjoying a glass of wine with lunch overlooking the river on the south bank was a nice contrast to our lunch venue from yesterday ... a first floor view from a very popular 24-hour cafe/bistro of one the main city streets where street artists were performing for our entertainment. 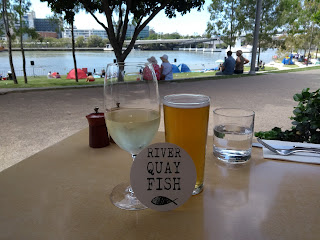 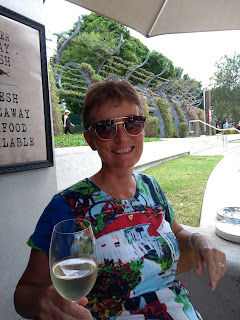 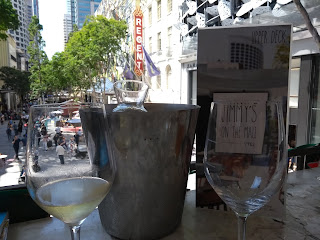 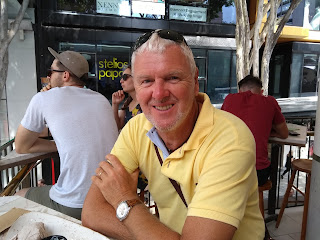 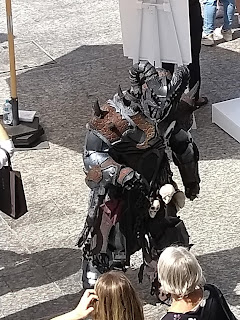 So far we've been really enjoying our time here, from the trip here on a Greyhound Bus (a first time for us both) and with the finale of the Brisbane festival and a river trip still to come. Such a contrast from our rodeo experience of last Saturday in the Queensland hinterland but just as much fun!! 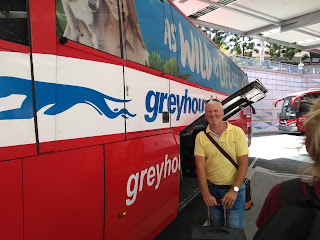