Maybe not of the world but certainly of the third leg (Las Perlas Islands to Galapagos) of the World ARC, division A (the racing division where we are up against far bigger and therfore faster boats). We turned up to the skippers' briefing, followed by the prize giving. We weren't expecting anything, so when the third and second places were announced we had virtually switched off, then Andrew, one of the ARC staff announced "in first place, and very well deserved, is TUMI!" There was a massive cheer in the room, and we were both thrilled! We went on to a celebration dinner with the rest of the fleet, which ended up in something of a bun fight with serviettes flying between the tables much to the amusement of the kids in the group, and most of the adults too. All in all it was a good day!

It started early with some boat maintenance, Phil was helping me clean off the beard that had grown on the waterline of the hull, ironic that the Galapagos authorities insisted that we had a pristine underside (which we did) and then the growth on the boat has gone mad. Anyway, we cleaned it off with a scouring pad, and as we rounded the bow to do the other side, Phil decided to throw himself into the water over the front of the dinghy. He was not happy about being in the water given the tales of sharks in the anchorage, but I couldn't stop laughing at the spectacle. Udo from Endo2 was equally amused as he watched the event unfold. It has made Phil an accepted member of the fleet immediately.

When the work was done, we went back to Las Grietas for another snorkel, and this time we went all the way through the rift. The further we went, the quieter it became, and the fish got larger and more numerous. Speaking to the warden in my best spanish, I asked her how the fish got there. Apparently,  they got through the gaps in the rocks from the ocean as small toddlers, but then they grew too large to get back again, so they stay and get bigger still. We did also see a blue and white spotted moray eel that flitted between two of the pools. Very nice to see.

Today, we are getting the last provisions (fresh fruit and veg) for the long trip. Looking at the Windyty app, it looks as though we will be able to take the rhumb line to the Marquesas! After we got back to the boat I noticed that the dan d
Buoy wasn't sitting properly in its holder and in going across to resit it I noticed that the fishing rod was missing! It turns out that it's been stolen, as has that of another rally boat. Not a nice memory of the Galapagos. Debra broadcast what had happened on the VHF rally channel and asked if anyone had any fishing tackle for sale and we're now the proud owners of some very impressive kit. I'm not sure it will improve our fishing prowess however ....

Our last trip out this afternoon was to Tortuga Bay, a beautiful bay 4km from Puerto Ayora. After the walk there we were ready for a refreshing swim before taking a local boat back. 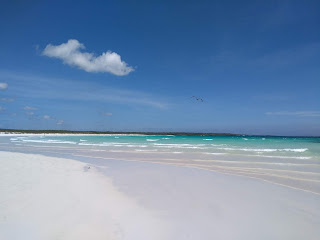 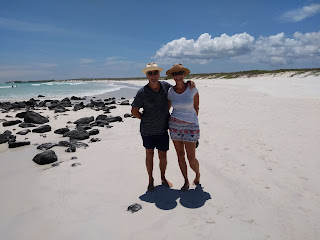 So now it's time to head back to Tumi in readiness for our departure tomorrow. We'll maintain a blog on our trip but won't be able to upload it until we arrive in the Marquesas in around 3 weeks time.