Boy, Puerto Ayora on Isla Santa Cruz is different from the other two islands we have visited. Welcome to the big city of the Galapagos, home to over 20,000 Ecuadorians and probably as many tourists judging by the number of tour operators, bars, restaurants and gift shops. Quite a culture shock after the laid back tranquillity and beauty of Isabela! Our first impressions wwren’t that favourable to be honest but after a couple of nights here and a bit of exploration we’re more in tune with the place.


Saturday was crew change day: Jackie departed and Phil arrived and in the gap inbetween we gave Tumi a good clean and reconfigured things so that all three cabins can be in use. We also had the diesel we had ordered last week delivered, another step towards the big departure on Wednesday.


Sunday morning saw us up bright and early to head off to Las Grietas, a narrow cleft in the landscape where fresh water from the mountains mixes with sea water to form an interesting bathing pool. The walk there along a trail through salt marshes gave Phil his first taste of Galapagos scenery, flora and fauna. We were all glad of the refreshing swim in Las Grietas by the time we arrived, hot and sweaty after our kilometre walk there.

We headed into the highlands in the afternoon to view some of the volcanic topography … vast sunken craters at Los Gemelos, where the earth’s crust has collapsed in on itself as a result of movement in the crust. Apparently at one time there was a layer of lava at the surface and when volcanic action below opened up an underground bubble, the surface collapsed in on itself creating several acres of pit craters. 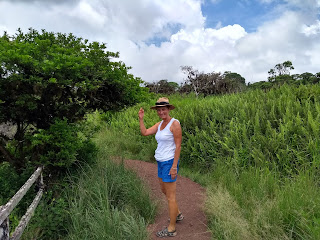 We continued to the El Chato giant tortoise reserve where these huge reptiles roam through surprisingly lush countryside. The variety on this island have far higher dome-shaped shells than those on either Isabela or San Cristobal and shorter necks as they don’t have to stretch as far to reach vegetation. 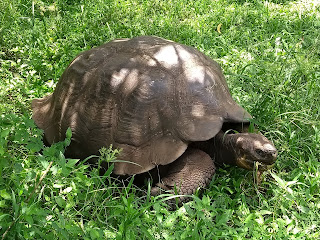 The reserve also has lava tunnels within its boundaries and so we ventured down a steep staircase into the 150metre long tunnel formed by rushing rivers of lava. The outer surface cooled and hardened whereas the inner part continued to flow until it emptied itself onto the earth thereby leaving a hollow tube behind. All very interesting, again demonstrating the power of nature. 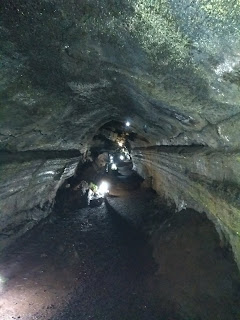 Last night was the first ‘World ARC Ladies Night’ when the twenty or so ladies in the fleet headed out for cocktails and dinner in downtown Puerto Ayora! A fun (and late) night indeed!