When we checked into French Polynesia the day before yesterday, all the formalities were completed, we were all given a lei to wear and we were able to catch up with some of the other sailors who had equally just arrived and share our experiences. 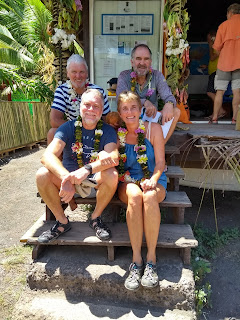 Our arrival coincided with a Polynesian night at a local hotel, so we duly signed up for it and then went exploring the nearby town (1 mile away, 40 minutes’ walk). We took a cab as we hadn’t used our legs for weeks and we didn’t know where we were going, and we were dropped off in the centre two minutes later. First stop was the bank to change some dollars into CFP, the local Polynesian Franc. Next stop was La Poste to get a sim card for the mobile phone. That done, we should have been free to connect to the rest of the world. Sadly, not true we can make local calls, but no internet connectivity at all. This sets us back several years in reality, to the days when we were sailing on Pandora and had to find internet cafes to get connected. It’s just the same here, only the cafes are non-existent, and we have to go and eat somewhere to get wifi. 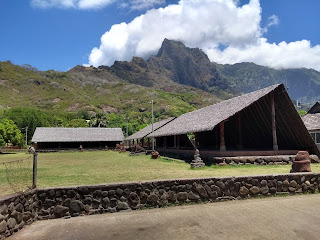 Anyway, we went to the Polynesian evening and were regaled with traditional warrior dancing and a Hakka. We could imagine armies of warriors facing each other to pay their respects before going into battle (I respect you but I’m going to kill you, it’s nothing personal!) and it was an awesome display of raw savagery, softened by the graceful gentleness and delicacy of the female dancers. 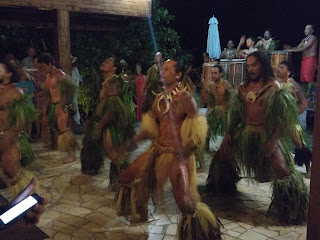 Yesterday, we hired a 4WD car and drove around the island – all of it! There are only 3 roads that are considered passable, and you certainly need a 4WD to do it, the roads are partially concrete and mostly dirt track. We managed to negotiate our way to the far end of the island to visit the sacred sites where the Tiki statues are kept. They are obviously very significant sites, and particularly the second one, Ta’Aoa was immense, covering a huge area, all raw stones made into platforms etc. 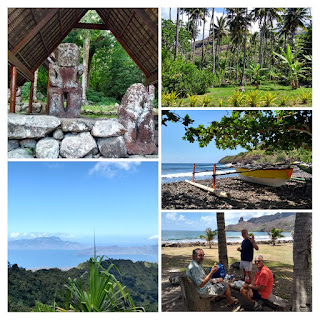 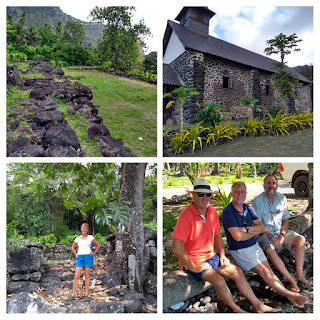