The WARC organisers arranged a beach BBQ for us all today in a local national Park. We duly assembled at 9am for the coach transfer to the beach and off we set.

Santa Marta is a relatively progressive and modern city, albeit with an historic centre (it's the oldest city on the Caribbean coast of Colombia) and we assumed it would be reasonably representative of the wider country. How wrong we were. Once we left the suburbs of Santa Marta, the towns and villages we passed through told a very different story, one of hardship and poverty, with ramshackle homes, stray dogs, and unmade roads, barely more than mud tracks. It was quite upsetting to see.

After bumping along one of these roads for approaching an hour we finally arrived at a beautiful and unspoilt beach surrounded by scrub covered mountains coming right down to the sea, the Sierra Nevada de Santa Marta. Stunning. 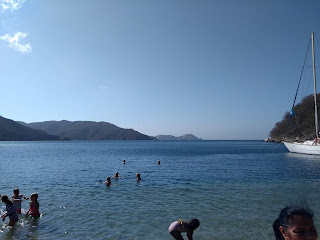 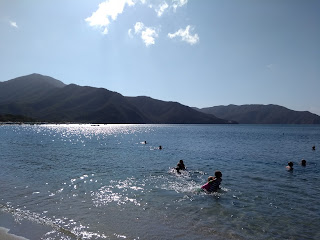 We watched local fishermen dragging in their nets from the beach, and the paltry catch their hard labour achieved. Barely enough to sustain them and their families. It really underlines how lucky and privileged we are in the western world.

Our day passed very pleasantly, enjoying the surprisingly fresh sea and the bbq before returning to the marina tired but happy. A quiet night in beckons!