We had a great sail up from Bequia to St Lucia on Thursday, windy but from an angle that allowed us to fly along averaging around 8 knots. Fantastic. We made such good time that we decided to push on to St Anne in Martinique fully expecting to arrive around nightfall. Sadly for us the wind direction shifted north and with it the swell leaving us beating into wind and waves and making for slow progress.

When we were about an hour from St Anne we took the decision to start the engine to motorsail the rest of the way. With the fancy folding propeller we have fitted, we have to initially go into reverse, not an easy job on a yacht with sails deployed. Anyway we fired up the engine, put it in reverse and pointed Tumi up into the wind to reduce the drive from the sails until we slowed almost to a standstill and then at that point changed into drive and fell off the wind. All should have been fine except Paul noticed white smoke from the exhaust, and quite a lot of it, not what we wanted to see! So, with the thought of the World ARC only a week away, we decided to turn around and head back to St Lucia so we could get someone to look at the engine. We were both hacked off at the thought of another problem, just when we thought we were finished with all the maintenance and repairs.

We dropped anchor in Rodney Bay just before 8pm, sailing virtually all the way and only using the engine for the last few minutes when we couldn't see any obvious smoke, a good sign. We decided to check the oil and test it out the next morning once it had cooled down and that is just what we did. Oil level good and clean; no smoke in the exhaust with the engine in neutral running at differing revs. We needed to test it under load as well so we up-anchored and set off for Martinique. All seemed fine and, on arrival at St Anne we replicated what we had done the night before and again nothing.

Paul had been thinking about it overnight and wondered if we moved too quickly from high-rev reverse to high-rev drive causing the fuel jets to get out of synch. Turning off the engine as we did allowed them to settle down again. Maybe. We'll monitor the situation as we sail back to St Lucia tomorrow and if we have any doubts we'll have the engine looked at before we leave but at the moment we think it was a one-off anomaly.

We spent the rest of yesterday walking along the beach in St Anne, relaxing on board and finishing off the day with a sunset bbq. Not bad at all! 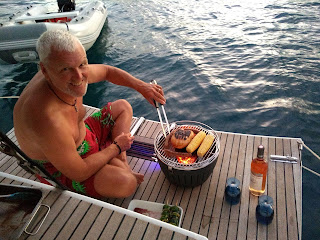 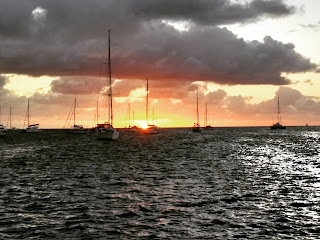 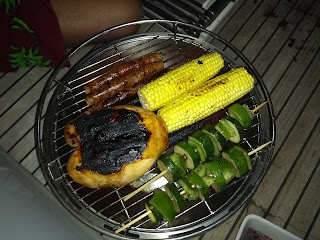