After weathering two days on confined on board, Friday because it rained all day and Saturday because it was very windy and boats were dancing around at anchor and coming close to running into each other, we ventured ashore on Sunday very glad to be stretching our legs again!  It hadn't been totally isolating over the previous two days: Saturday was a sunny day and we invited the couple off the neighbouring boat over for coffee and brownies (yes I baked, well Betty Crocker did and they were really very nice) plus had a manatee grazing alongside us for several hours. 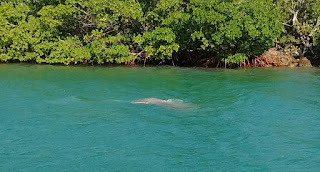 Sunday afternoon we were invited to join Dan & Jackie at the local Ritz Carlton to watch their football team, the New England Patriots, play the Denver Broncos in the semi-finals of the NFL.  So the four of us climbed on our bikes (ours are somewhat rusty by now) and cycled along to this five star hotel where we parked them alongside the BMWs and Mercs and headed out to the pool bar to watch the match.

We've never watched an American football game before but quickly determined it is played in four quarters, each of fifteen minutes, so 60 minutes of playing time in total.  Would you believe it actually took 3 hours and 45 minutes to play it?  So many breaks for TV commercials, time-outs and heaven knows what else but it was a fun afternoon and I now know more about the rules in American football than I do of English football or rugby.  I won't mention how much the bar bill was ..... ouch!

Yesterday was lovely and we seemed to spend most of it chatting to other sailors anchored here, plus cycling out to the lighthouse.  Paul also gave Dan a haircut, well more of a buzzcut, on the dockside as Jackie didn't dare do it, so he's now got a very short short back and sides!  The things we do for friends!! 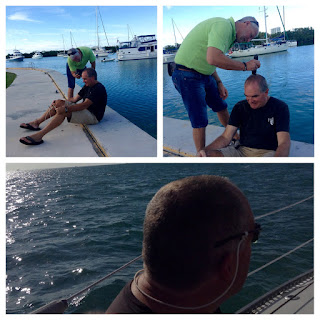 The anchorage is part of a state national park which has a number of BBQ stations scattered throughout it so Dan & Jackie suggested a sunset BBQ last night.  A great idea, tasty food, spectacular sunset and lots of fun.  We got into a bit of trouble with the park manager who was concerned we might set fire to the place (we were burning palm fronds by this point that whooshed into flame very satisfactorily) but we assured him that we were sober and sensible adults! 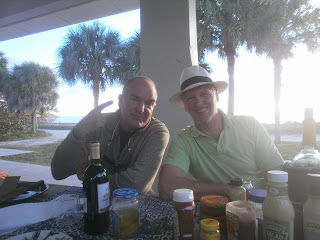 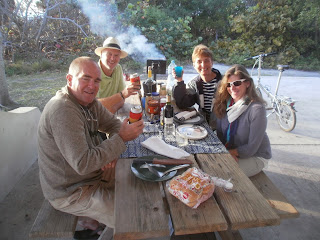 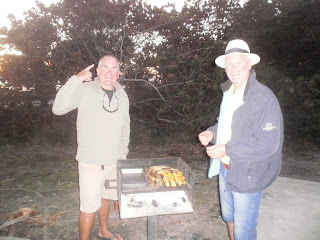 We had planned on departing today as it looked to be, and is, a beautiful sailing day but the counsel we got from several boats was don't sail down to Key West until you've got a northerly breeze.  Apparently the channel inside the reef which you have to use to avoid the effect of the Gulf Stream against you cuts up rough if the wind is from the south.  So we listened to the local advice and will depart here on Friday morning.  Given we've postponed Cuba until November we've got plenty of time and so will have a lazy few days in the sun ... weather is glorious ... at last!!
Newer Post Older Post Home