After a weekend of boat maintenance (think cleaning, polishing, fixing) we hired a car yesterday to start to explore the area around Pittwater and further inland. Our plans to visit West Head in Ku-ring-gai National Park didn't materialise however as we had to wait for a marine engineer to come and look at the generator which had decided to stop working .. no raw water intake. The culprit turned out to be a faulty impeller and now replaced everything is functioning properly again, thank goodness.

So this morning, bright and early, we jumped into the car to head into the Blue Mountains National Park, a vast area (think the size of Switzerland or two and a half times the size of the Grand Canyon national park) a couple of hours west of Sydney. The area is covered in blue gum trees, some as tall as 70 meters, and the eucalyptus oil they release into the air is the cause of the blue tinge to the rock faces. Apparently back in the 1930s the gum trees were almost all felled to facilitate the planting of walnut trees and it was only the endeavours of a small group of bushwalkers who raised $130 to buy the land that saved them. Twenty or so years later the area was established as a national park.

Various lookouts provide incredible views out over the valleys that bisect the area ... Jamison, Grose, Megalong ... far below the escarpments ringing the valley floors. The geology is fascinating with the harder sandstone having not been eroded by the rivers like the softer shale beneath it, forming dramatic cliffs towering hundreds of feet high. Breathtaking. 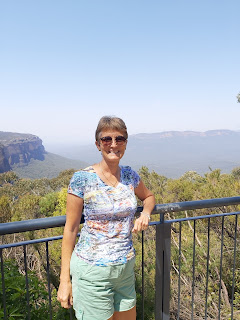 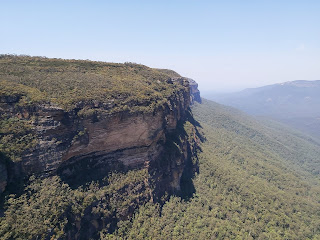 In places the sandstone has been undercut and the trail runs underneath huge rock overhangs. 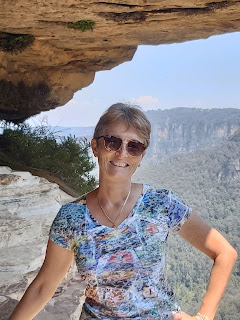 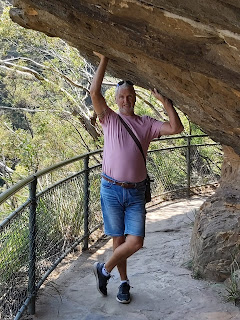 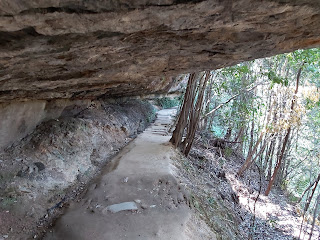 The trails were created by man in the last century to enable human access to the waterfalls and valley floors, encouraging early tourists. Stone steps were carved into the sheer rock by lowering men down the cliff face on ropes and these are still evident today, although new steps and handrails have been added to keep walkers away from the drop. 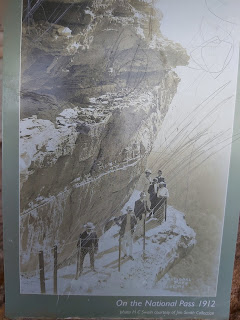 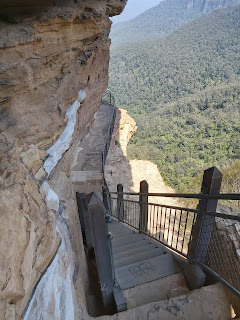 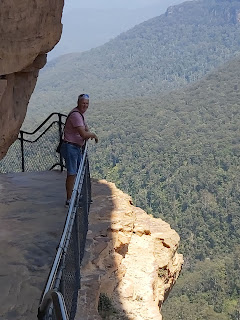 Being the end of the dry season the waterfalls are not very impressive in terms of flow but we hope to revisit again in January when we will climb down to the bottom of the falls. Wentworth Falls are 187m high and when in full spate the spray from the bottom apparently rises halfway back up the falls! Quite a sight. 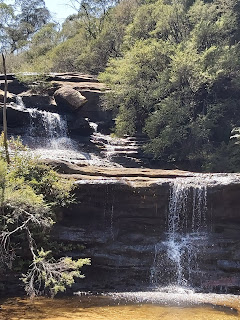 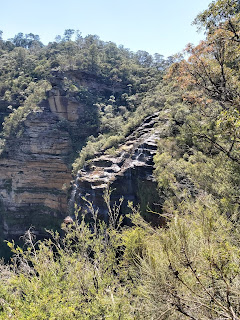 There are a surprising number of reasonably sized towns in the area lying along the mountain ridge, Leura (the prettiest), Karoomba, Blackheath, Bell, Bilpin, all connected by the trans-highland highway and railway. Close to Leura is the famed 'Three Sisters' rock formation, very impressive towering over the Jamison Valley floor, but far too big a crowd for our liking! 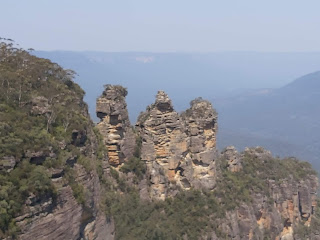 There was a definite haze over the mountains today, in fact over the coast and city too, a result of the fires blazing slightly further north at Port Macquarie. The news reported that while there have been no human victims, sadly many koalas in a reserve devastated by the blaze have perished. Poor things, asleep in the top of their gum trees as the fire rages below them. It's hardly surprising we haven't managed to see any in the wild ... fire, dogs, cars and chlamydia are wiping them out.

Spring has arrived in the mountains with new leaves on the deciduous trees and wild flowers blooming. It's beautiful. 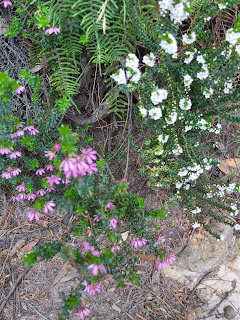 We were lucky enough to see a few waratah plants in full flower and very tall bull rush like grasses. 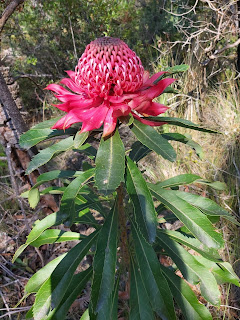 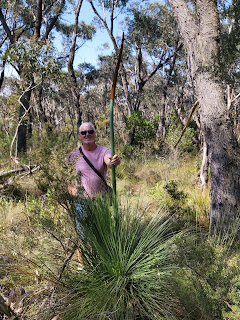 The views out over the Grose Valley from Govetts Leap at Blackheath were stupendous, somewhere else we would like to revisit and walk the trail around the rim. So many things to do when we return in January! 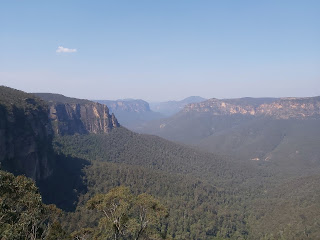 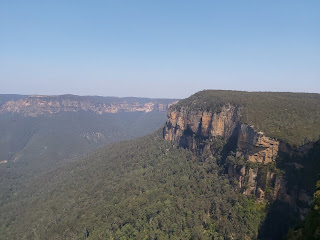 Running out of time we missed out on visiting Mount Tomah, the Blue Mountain Botanical Gardens and other natural wonders but we did round off the trip with a homemade apple pie from the 'Pie in the Sky' bakery in Bilpin, a big apple growing area. Delicious!