28/8/2019: Yeppoon, Capricorn Coast (because the Tropic of Capricorn passes through it!), Queensland

We started our sail southeast on Saturday morning knowing full well that it was going to be a beat into the prevailing wind and swell but hoping both being forecast to be light would make the going fairly easy. And that's how it transpired to be ... not too much slamming into waves but slow, slow progress. On Saturday in over 9 hours of tacking back and forth across the wind we managed to make only 30 miles southeast before dropping anchor at dusk, and with 360 miles to cover we realised that sailing alone wasn't really an option, we're far too impatient! So when Sunday morning dawned and the winds were still from the southeast, on went the engine and we motorsailed on the Rhum line directly towards our destination to make more progress.

Saturday was the final day of Hamilton Island race week and as we left Airlie Beach and turned into Whitsunday Passage we were faced with the sight of about 100 yachts, all flying colourful spinnakers, sailing across our path! As we were all under sail the 'rules of the road' determined that we technically had right of way and so they had to manoeuvre around us but there were so many of them that we decided to put in another tack to port in the hope that we could keep out of the way and pass behind the majority of them. It  seemed a good plan but when we ran out of sea room in the narrow passage and tacked back to starboard, we found ourselves heading directly into the returning race fleet. This time however they were the stand on vessels and we were the ones to take evasive action trying to negotiate a path through the myriad yachts crossing our path.  So we ploughed on, trying to time passing between boats without having to deviate from our course too often and safely made it through. Phew!

Fortunately on Sunday evening the winds moved to the northeast and we enjoyed several hours of sailing, gladly giving the engine a rest and, making decent progress, we decided to keep going until the early hours of Monday morning to make the most of it. Dropping anchor at 2.45am in a sheltered bay on one of the many Barrier Reef islands, this time West Bay on Middle Percy Island, we gratefully climbed into bed for a few hours sleep.

Monday morning dawned with what little wind there was being from the southeast again so it was back to motorsailing with 105 miles to cover before the next convenient anchorage on Great Keppel Island. Once again in the early evening the winds switched to the northeast and so off went the engine and peace reigned for a few hours, this time arriving at our overnight spot at 3.30am. This bay turned out to be a rolly anchorage so we didn't sleep too well!

We'd already decided to break the journey southeast in Keppel Bay close to the town of Yeppoon so that we could explore ashore. So on Tuesday afternoon at around mid-tide we arrived at Keppel Bay Marina and tied up at the pontoon ready for a good night's sleep. And boy did we sleep, 11 hours straight through, awaking this morning feeling refreshed and raring to go.

Picking up our hire car at 9am headed south along the scenic coastal highway leading to the small town of Emu Park, home to the famous singing ship memorial to Captain Cook who discovered and named Keppel Bay back in 1770. Yet again the guy had been here before us, a very common feature on our Pacific odyssey!! This modern installation has three tubes drilled with holes which play a note as the wind blows over them. With very little wind we could barely hear anything but there was a definite background noise emitting from the memorial. 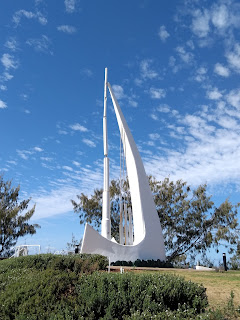 There was also a very moving memorial park in honour of WW1 Australian soldiers who lost their lives fighting for the Allied Forces. The centrepiece depicted a group of sixteen ANZAC soldiers walking along duckboards on a ridge to relieve their comrades at the front line near Hodge in Belgium in October 1917, silhouetted at dusk against the evening sky. It's an interpretation of a photo taken by Australia's official WW1 photographer, Frank Hurley. 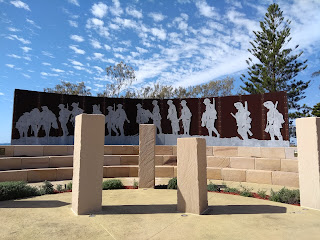 As with so many of the other places we have visited in Queensland so far, everything is well cared for, no litter nor graffiti, lawns mown, flowerbeds weeded. Whether it is creating employment opportunities or just national pride we don't know but it certainly shows up much of the UK! The sunshine and beautiful backdrop help too! 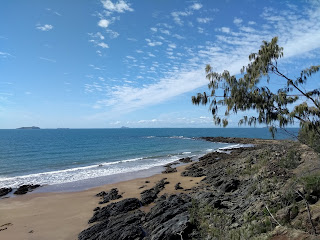 Driving on from Emu Park we headed inland towards Rockhampton through pleasant but very arid countryside and woodland. Our next stop was the Koorana Crocodile Farm, set in the middle of nowhere and the first commercial crocodile farm in Queensland being established back in the 1980s. Back then there were only 3000 saltwater crocodiles left in Queensland having been hunted to near extinction. Campaigning for a change in legislation to permit commercial farming of these reptiles, the owners set up their farm to try to kill the black market and give the remaining crocs a fighting chance of survival. They obviously wanted to make a profit too!! Conservation Through Commerce is their strap line and it's obviously worked: over thirty years later they have 5000 crocodiles at their farm and the wild population has increased to 150,000.

Neither of us had any idea of the cost of crocodile leather, nor items made from it, before we arrived but are now in the know! Untreated leather is priced at US$26 per centimetre, and a grade A processed skin US$400 per centimetre. No wonder belts were priced at $250, purses at $650 and handbags $2,500!!

All crocodiles grow bones in their skin making it very hard wearing and inflexible in all but one direction. Saltwater crocodiles only grow these bones along their spine and so the soft underbelly is ideal for leather goods. Throw in the size these beasts grow to (usually an adult male makes 5 metres but one was captured in Texas at over 20metres!) then they are the ideal breed to farm. Breeding pairs, or sometimes harems with one male having several partners, produce one clutch of eggs per year which are removed for incubation within the farm. Interestingly the temperature in the incubator room determines the sex of the baby croc and so is set to yield about 80% males and 20% females, the males being both hardier and larger ... more profit!

Many of the larger residents on the farm have been captured by the owner, removing a threat from local parks and waterways. These creatures can stay underwater for up to six hours, jump their body length, move at 20km per hour, don't even make a ripple moving through the water and lurk at the waters edge. Hardly surprising many unsuspecting fishermen and people paddling along the foreshore are attacked, not even realising there is a croc nearby. In that regards the visit to the farm was essential, making everyone 'crocaware' so to speak. It also put paid to myths about zigzagging away from a chasing crocodile (it doesn't work!) or climbing a tree to escape (they can wait at the bottom for up to 3 months without water, plus whack the tree repeatedly with their tails to knock prey out of it). Definitely the best advice is to stay away from their likely habitation!!

Our informative and enthusiastic guide introduced us to several residents, feeding them chicken legs etc., and was obviously passionate about these dangerous creatures. More dangerous by far than their close relative the alligator (a pussy in comparison) he  explained that anywhere in Queensland north of Mackay and Airlie Beach is really no go for swimming off the beaches and that is why so many towns have onshore lagoons for people to enjoy. Fortunately the crocs rarely swim out to the Barrier Reef Islands (a good job given we paddled for miles along Whitehaven Beach!) but have been known to swim up to 1600km offshore! There's apparently no escape from them!! Fortunately we're now moving south into areas too cold to sustain them. Note to self: No swimming until in New South Wales!! 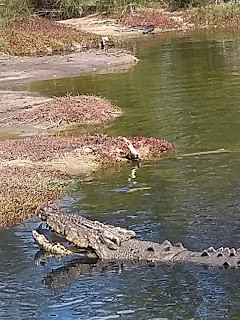 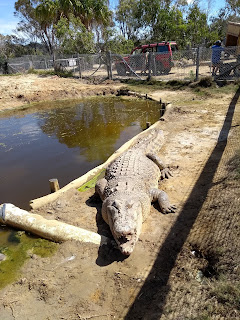 The finale of the tour was handling a two year old saltie called Harley, whose snout had been conveniently taped closed! Apparently used to being handled I wasn't keen but after Paul survived the experience I gave it a go. Harley was surprisingly cool to the touch and soft-skinned, reasonably heavy and very docile, thank goodness! 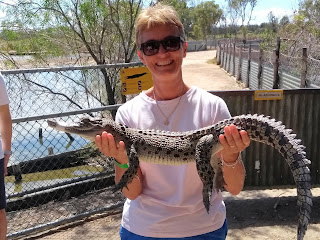 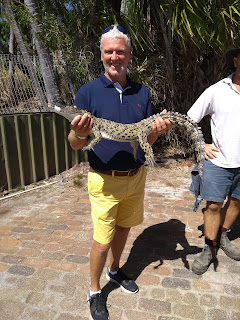 Actually there was one other finale, dining on crocodile pie for lunch! Surprisingly tender and tasty, a cross between fish and chicken, it's high in protein and low in fat so very good for you!! 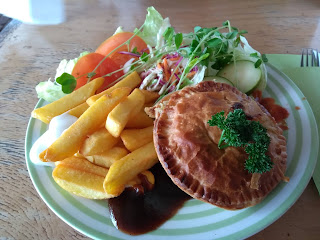 We rounded off the day by driving further inland to visit Capricorn Caves, a cave network formed in an old coral reef pushed above ground millions of years ago by plate tectonics. Unlike many caves we have visited before where dripping water has formed stalactites and stalagmites, this is a dry cave network with around 30 chambers of which we visited 9. The 'cathedral' chamber has incredible acoustics, supposedly better than the Sydney Opera House (or so they claim!) while the zigzag passage (effectively squeezing through a lengthy narrow crack) is not for those prone to claustrophobia! 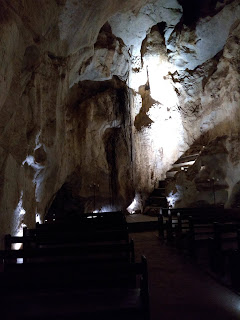 So all in all a fascinating, varied and full day!

One final note: guess what Paul Hogan wrestled in Crocodile Dundee? You've guessed it, an alligator!!!