When we first arrived in Les Saintes, we didn't think that there had been much damage caused by this year's hurricane. How wrong we were. We have walked all round the island in the past few days and it is a story of two halves. The windward side of the island (the eastern side) has been hard hit; trees are down, the beaches are strewn with debris which has yet to be cleared away by the only tractor on the island. It will be a steady, but lengthy process to get the rubbish cleared. 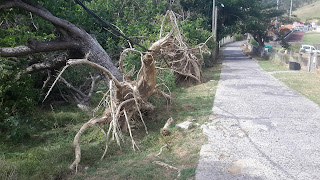 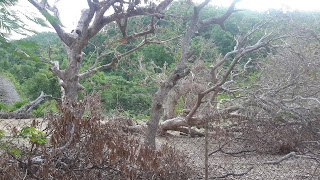 Several houses appear to be taking advantage of the piles of rubbish to dispose of a few unwanted chattels, but who can blame them? In general, the houses and businesses appear to have withstood the onslaught, but we were chatting to one lady about the storm and she told us exactly what happened. The storm raged through the island for 6 hours. As it approached, it rose from a category 1 to 2, then 3, then 4/5 in a very short space of time. Then the island had the eye pass over and the back half hit shortly afterwards. During the storm a few boats were pushed onto the beach and we have noticed that some of the moorings are missing too.

It is probably early in the sailing season here, but there are several moorings free every day. Normally it is a scramble in the mornings to grab any buoy that comes free as boats move on. We had a particularly windy night last night, and as I checked our lines this morning I noticed that one of our two lines had virtually chafed through overnight. I replaced the line as soon as I could and we are now ok, but it just goes to show that the weather still wreaks havoc and we can't be complacent.

Yesterday we had lunch at a waterside restaurant called Ti Do Boubou, which gets the best ratings on the island, and the rating is very justified. The food was excellent, the setting sublime, and the company unbeatable (it was just the two of us!). 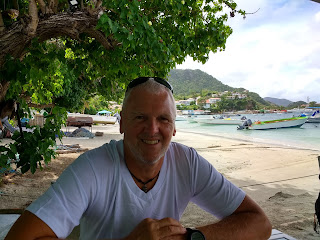 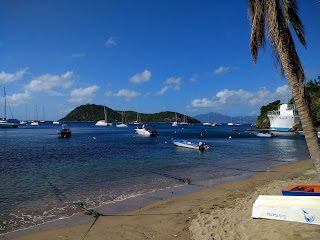 We are sitting in a really nice cafe using their internet service drinking a belgian beer - I love belgian beer! 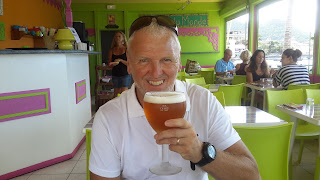