There are lies, damn lies, and weather forecasts.

How often do we report in our blog that the weather forecasters have got it SO wrong? Too many times. We fell foul of them once again on our way from Les Saintes to Antigua. We had checked the weather daily, even though we were enjoying the French island's hospitality and it seemed to us that Saturday was a good day to make the passage. 15 to 20 knots of wind, coming from the East. Perfect for a nice easy sail. No! We managed to sail most of the leeward side of Guadeloupe (unusual in itself, we mostly have to motor) but we thought that it was a bonus not to have to put the engine on to keep our speed up. As we passed the north end of the island, we were hit by 40 to 45 knot winds. Catabatic winds, we thought, they will settle down as we get clear of the influence of the north end of the landmass. How wrong we were. We had reefed the sails down heavily to just a scrap of canvas in both the sails and we screamed our way north at 10 knots through the water, 8 knots over ground allowing for the current running against us. It was a lively sail to say the least!

I tried my hand at fishing on the way, but at 8 knots, there aren't many fish that can take the lure and the journey proved once again unfruitful. Doesn't stop me trying though. Arriving back in Antigua, we anchored in Falmouth Harbour and spent the night on board under the yellow quarantine flag. Don't panic, that just means that we haven't cleared customs and immigration which I duly did on Sunday morning, paying over my $40 fees. There is a premium for clearing into Falmouth, but it is less hassle, so it balances itself out. It's nice being back, and on Saturday evening at 6pm we were entertained by a cacophonous medley of ships horns throughout the anchorage. We hoped it would be repeated on Sunday and we were ready with our recorder to be able to share it with you, but no such luck. We'll try again another day and post the concert!

On Monday, the forecast was wrong yet again. We wanted to sail around to Jolly Harbour. The forecast said next to no wind, dropping as the day progressed to almost nothing. We decided to go anyway, weighed anchor and departed. As we cleared the land, the winds picked up and we had a great sail round. Sometimes they get it wrong and it actually works in our favour, a rare occasion.

Here in JH, we have been busy getting a few things sorted  out on the boat repairing toilets (always my favourite sh*tty job) splicing bridles for quick and easy attachment to mooring balls (I like splicing), fixing hinges on the companionway doors that had worked themselves wobbly, repaired some flipflops, and spliced a clip onto the painter (rope) for the dinghy to make it easier to attach when we tie it up. The real bonus was that we needed some spares from the chandlers, and I happened to notice on a tourist map that Debra had picked up somewhere that if I presented said map at the checkout we would get 10% discount in the store. It caused a bit of a stir as I was the first person to take advantage of this offer this year, but they honoured it as they had to and we ended up getting lots of spares, far more than they wanted us to!

The other thing we have done this week is make our first steps in preparing to join the World ARC in January 2019. We are now the proud owners of the electronic charts for the Pacific Islands and Australia & New Zealand which I found at bargain prices online. We are also in negotiations for the paper versions, cruising guides, and courtesy flags for the countries between St Lucia and Australia. We have also contacted our sailing friends who have expressed an interest in joining us for various of the legs of the journey and have received enthusiastic replies. It looks as though we will have more than enough support for the trip, which is good news indeed.

The sunsets have been pretty amazing too. 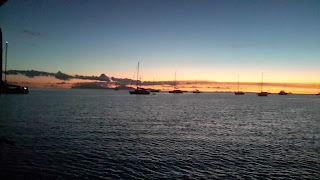 This one has Montserrat in the background with the volcano smoking vigorously. We wonder how long it will be before it erupts again.

The other bit of news is that Debra and I have become models for a line of jewellery. We bought some bracelets from a lady we met in the BVI earlier this year who has recently moved to Antigua as the BVI have been totally trashed by the hurricane this year. She asked us to take photos of ourselves wearing her bracelets which we have done, and now they are proudly displayed on her website for all to see. Fame at last? 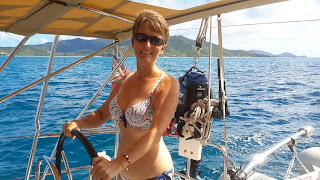 Last night we had a barbecue. 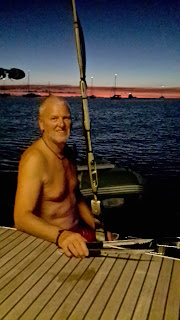 I was sitting on the bathing platform with the barbecue cooking our protein and you would not believe the size of the Tarpon that were swimming by just a foot below my perch. I shone the torch down into  the water and their eyes gleamed green in the beam with their bodies stretching behind them. I know that the predators all appear at night, seeing just how big these things are, I ain't going swimming after dark!