We'd got a lot of miles to cover today getting to our next base in Mole Creek, not where we thought we'd booked but we're blaming the Airbnb location map for that! So it was an early start to pay another quick visit to Port Arthur before heading to the Mount Field National Park and finally crossing the central highland region to drop down towards the northern coast of Tasmania.

We'd headed back to our accommodation yesterday before we'd visited the commandant's house, penitentiary, hospital and barracks at Port Arthur and thought we should make the effort to go this morning just in case we never come to Tasmania again! So we were there as the site opened and largely had it to ourselves. And we're glad we did! The commandant's house set off as a simple 4-room structure back in the 1840s but successive commandants extended it and when the penal colony closed in 1877, becoming the small town of Carnarvon, it became a hotel and then guesthouse, being extended again by successive owners. It was interesting to see the luxury that the civilians lived in, before heading down to the penitentiary (itself originally built as a flour store) where 120 convicts were housed in solitary confinement on the lower two floors, while another 500 were housed in dormitories on the two top floors. The solitary confinement cells were tiny, probably only 6ft x 4ft with only one small window set very high in the wall. Despite the purpose of the site, all the buildings were well built and attractive, at least externally. 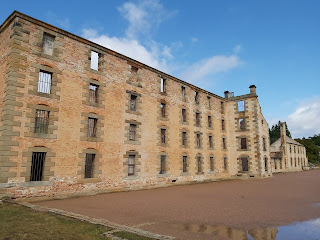 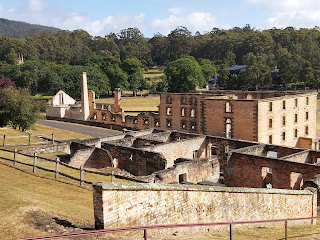 And then started the trek north! We wanted to break it up and had read that the small town of Richmond was nice and had a lovely old bridge so we made it our first stop, strolling along the attractive high street lined with antique shops and art galleries, and eating our lunch overlooking the bridge. 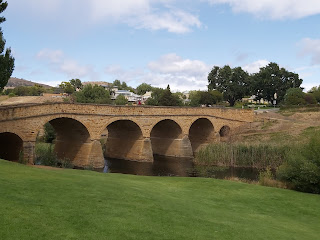 Stage two was to take us NW of Hobart to the Mount Field national park,  home to several lovely waterfalls and the tallest trees in Australia. We passed a vineyard with a cellar door just outside Richmond and decided to make an impromptu call to sample some Tasmanian wines. It was a lovely set up but the wines didn't suit our palates at all! As the host said, they are 'more herbaceous' than NZ wines and whether that was the difference or not, we really didn't like them!

Driving on towards the national park we passed through several rain showers and looking at the ominous clouds over the mountains ahead, we didn't hold out much hope for our waterfall walks when we arrived. But we were pleasantly surprised and spent an enjoyable 90 mins walking through the forest in mainly sunshine. Result! The Russell Falls were spectacular, tall, arranged in three tiers and considered the prettiest waterfall in Tasmania. With the sun behind them and illuminating the spray, it was magical. 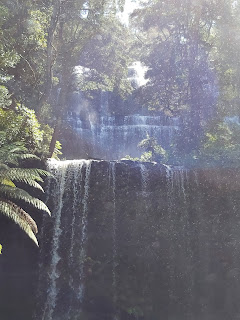 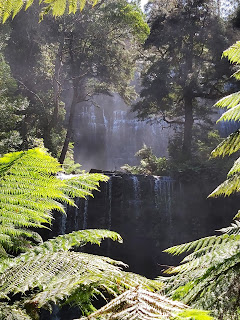 Climbing up the side of the falls to the Horseshoe Falls above, the views out over the forest were spectacular and no signs of the arid countryside we saw around Hobart was in evidence. 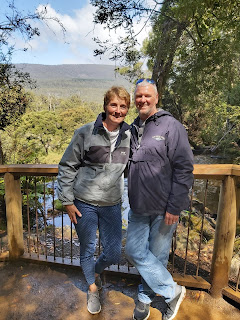 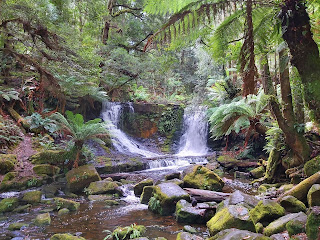 Continuing further into the forest we came to a grove of giant eucalyptus and myrtles towering over the other trees and ferns below. Some of these trees are over 200 years old and stand 75 metres or more tall. We both got a crick in our necks looking at them! 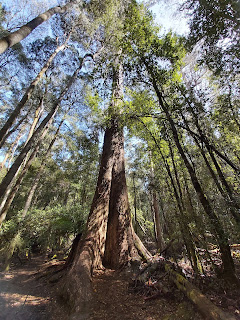 We still had another three hours to drive to reach our accommodation, traversing the central highlands region. Our hire car doesn't like hills, so we slowly climbed ever higher crossing prairie-like plains, surrounded by high escarpments, as we made our way up to Miena and the Great Lake through bleak tundra landscapes. Dramatically beautiful.

Today was forecast to be a cool day and it was at sea level, but by the time we were up on the plateau driving through a sleet storm the temperature dropped to 3 degrees! So much for Tasmanian summers! We didn't venture out of the car ....

Dropping down off the high plateau along the aptly named Meander Valley brought us to the town of Deloraine set in a scenic farming area. A short drive further and we had reached Mole Creek and our studio apartment for the next two nights, the Blue Wren Hideaway. It's fabulous, stylish, spotlessly clean, well equipped and with amazing views. What more could we ask for?! We're just very grateful there was no motorhome a available!! 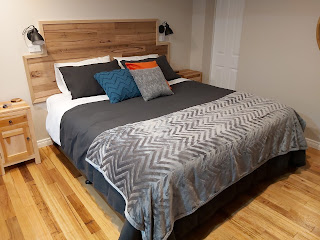 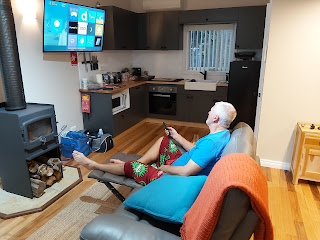 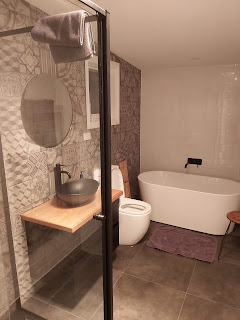 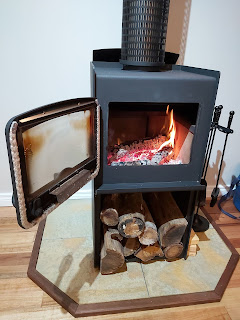