Our accommodation in the Hunter Valley at Elfin Hill was charming and we awoke this morning to a lovely breakfast and wonderful view. 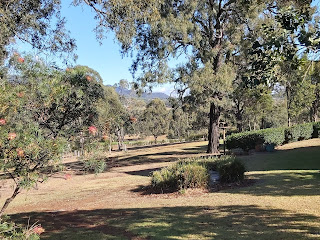 We had a lot of miles to cover during the day, having opted to take the scenic route, so by 9am we were on the road and waving Pokolbin goodbye as we followed the lesser used byways north passing through the most glorious countryside as we skirted the Barrington Tops National Park, crossing bridges, some with wooden planks making up the floor, dating from the late 19th century, on our way to Gloucester, via Stroud and Stratford, very reminiscent of home and presumably named by settlers from those towns in the 19th century. Names in Australia seem to fall into two camps: those based on aboriginal origins and others on the language of immigrant Europeans. So beside the Cotswold gems previously mentioned, we also passed through Weismantels and Keimbach along the way, ending our day in Woolgoolga. 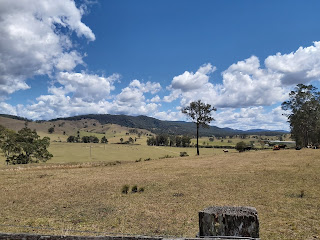 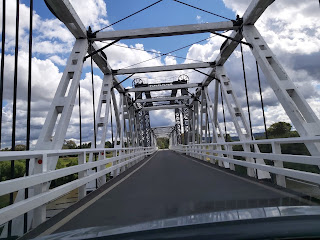 Stopping in Gloucester to stretch our legs, and to have a bit of retail therapy as it turned out, we tracked northeast towards the Pacific Highway. As we motored along at around 80 km/h through woodland areas (there are quite literally millions of gumtrees in this country!) Paul suddenly shouted out 'Stop! I've just seen a koala!'  Slamming the brakes on we reversed back 100 meters or so and, true enough, there was a wild koala sitting in the fork of a small gumtree and watching us with interest. We couldn't believe it! It's very uncommon to spot one in the wild (Australians we speak to tell us things like they've seen 3 in their lifetime for example) so we were exceptionally lucky and it made our day! 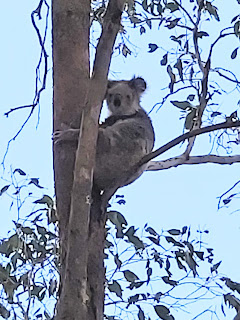 Continuing on, our next stop was at the Koala Hospital in Port Macquarie.  A charitable venture, receiving minimal government funding, they raise the funds they need to operate the facility via donations, retail sales (I helped out there again!) and adoptions. Volunteers help care for the injured koalas and go out to recover them after fires, road traffic accidents, dog attacks etc. They are particularly busy at the moment with the wild fires raging just south of town, the result of a lightning strike. So far they have recovered seven injured and dehydrated koalas from the areas they are permitted to access. They try to rehabilitate most of the koalas (around 60%) but some are either too sick and have to be euthanised and some become permanent residents.

Chlamydia is apparently a big problem for koalas and causes blindness. Several of the residents are blind yet manage to function very well in their known environment, scaling the gumtrees that are growing in their compounds. Koalas are very solitary creatures, and so sharing a territory in the hospital is not without its problems. But they all looked fit and well, despite their injuries, and are obviously very well cared for. They actually looked far better with lustrous coats than the one we saw in the wild. 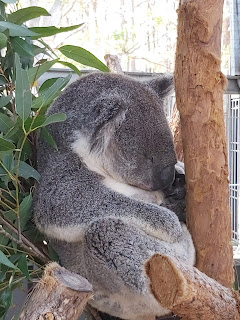 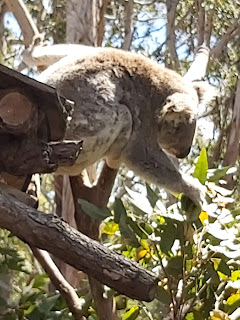 Heading further north on the final section of today's road trip we passed through Coffs Harbour where we had spent a week on our sail south and then on to Woolgoolga.  As with (apparently) all the east coast of Australia,  this small coastal town is surrounded by first class beaches. A lovely spot to spend the night! 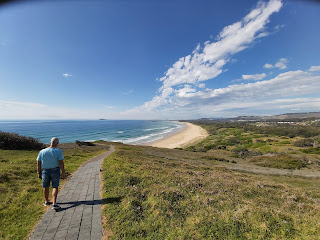 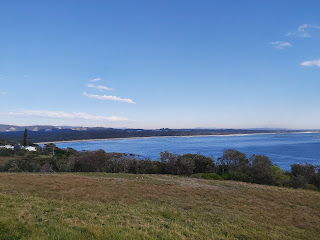 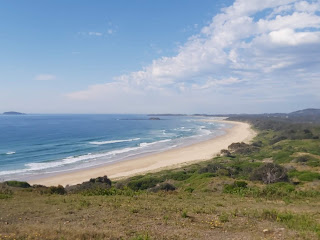