We'd been told that Vanuatu, and in particular Tanna, would be one of, if not the, highlight of the trip so we arrived with high expectations. Would it just be another tropical island with dramatic scenery and a friendly welcome from the locals, or more? Read on and draw your own conclusions!!


Named by Captain Cook back in the late 18th century, Tanna is the local world for soil and folklore has it that when he went ashore to meet the indigenous people for the first time, he picked up a handful of earth and, pointing at it, determined it was called tanna, and hence the island's name. As for the name of the actual bay and village, Port Resolution, this was apparently named as Cook declared it 'the solution to my navigational challenge', or words to that effect. The reality today is a deep and sheltered bay surrounded by high cliffs out of which steam/smoke vents from the very close, neighbouring active volcano spout and with several vents and hot springs making the water feel surprisingly warm - stepping down into the aluminium hulled dinghy we were both aware of how warm it felt under our feet.


This is the furthest south we have ventured at nearly twenty degrees south, and it is noticeably cooler, especially overnight when blankets have been dug out for the bed! Given it is technically winter in this hemisphere, the sun is as far north as it goes (the Tropic of Cancer is at 23.5 degrees north) and so we are over forty degrees of latitude away from it. That apart, daytime temperatures are still very pleasant but, as in many of the Melanesian countries, it is traditional to keep shoulders and knees covered and on this occasion this didn't make us overheat!


Despite not owning a yacht, nor apparently having many other types of boats themselves, the villagers of Port Resolution have built a yacht club! Set in well maintained gardens with flowering shrubs, swept roadways and a view over the bay, the structure is little more than an open sided shack but is the centre of activities for visiting yachties, of which the World ARC probably brings in the largest group.

Our arrival was obviously a big event for the villagers with the dirt tracks freshly swept and lined with flowers. Flags had been raised in the open area in the centre of the village where the locals play football (not rugby like most of their neighbours) and volleyball. The locals live in small dwellings with walls made from woven coconut palms and roofs thatched in the palm leaves themselves. They obviously take pride in their village and keep the small gardens well maintained and their homes freshly swept.


Stanley, one of the heads of the village, walked us around pointing out the school, church and other community buildings and took us along to a development site where volunteers from first world countries, especially Australia and New Zealand, come along to help build more substantial properties. At the moment a large group of NZ architecture students are on the island lending a hand. Tanna was devastated by a cyclone in 2014-15 and so projects such as this are key to the regeneration of the village.


The World Cruising Club, operators of the World ARC, also support the village. Every year we, the participants of the rally, are asked to make a donation and they match this and give the money to the village to spend on defined projects. In the years the rally has visited Port Resolution, these donations have built three school buildings, contributed to the yacht club and supplied several water tanks and solar panels. As the village has no electricity (only the capital of Tanna on the west coast has mains electricity) nor running water, such donations are very greatly appreciated.


The big event on Wednesday was the visit to Mount Yasur, one of the most accessible active volcanoes in the world. We had seen the plume of grey smoke rising from it on our approach to Tanna, and noticed the various smoking vents around the bay, and were both excited at the thought of climbing up to the rim of the bubbling crater. So at 3pm we all climbed into a motley selection of 4wd vehicles and set off along the rutted mud roads through the jungle. Most of the roads on the island aren't paved at all, and to say it was a bouncy and uncomfortable ride was an understatement, especially for Paul riding in the back of our truck sitting on an old cushion! We passed several small villages on our journey and arrived at the visitor centre some 45 minutes later where we swapped vehicles to ascend a couple of miles up the slopes of the volcano, hanging on for dear life in the back of another open truck. No health and safety regulations here! 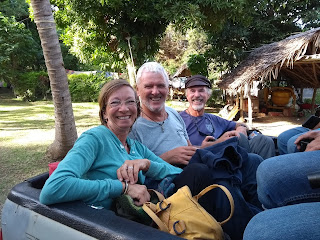 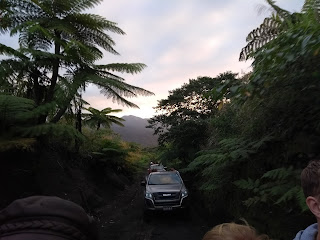 The final half mile or so was on foot, starting off up a concreted steep slope (which interestingly had an operational post box at the bottom of it!) bringing us to the rim of the crater. Our guides advised we needed to climb higher for a better view so off we trekked ascending an ash path up the side of the crater. No safety rails or handrails in evidence, we plodded up the steep slope, our leg muscles screaming at the exertion after 8 months afloat with little hiking. Just as we crested the summit, we were greeted with a jet of molten lava shooting up into the dusky air, our first experience of a really active volcano. 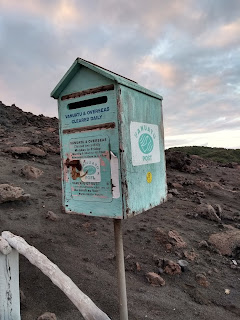 We remained at the top as night fell, witnessing many lava firework displays, an incredible sight, and inhaling the sulphurous odour which made our eyes sting. But what a spectacle against the night sky! The whole crater glowed an eerie red as smoke and ash billowed relentlessly from it. The highlight had to be the regular eruptions throwing sparks and red hot lava skywards. Definitely a tick in the box for us both! 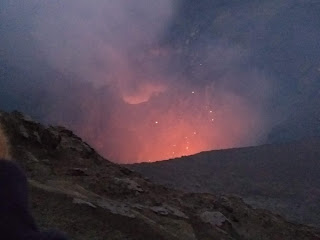 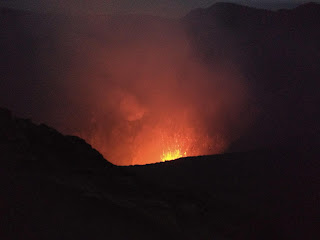 The journey back down the steep ash path in the pitch black of evening wasn't for the faint hearted! Thank goodness for lights on phones, otherwise we would have been stumbling around in the dark in a rather dangerous location!!


Yesterday was a very full day. The programme started off with a visit to the school where the 128 children sang beautifully for us all, and were so welll behaved. The Principal explained about the special relationship between the village and the World ARC and outlined the future projects they need assistance with … paying for an expert to train the staff and children in the use of the PCs donated by Rotary International, and also extra school rooms to be able to teach lessons in French and bring in children from outlying villages where French as opposed to English is spoken.


We had all been asked to take gifts to the school of pens, crayons, paper etc. which we happily did. We also donated an electric kettle for the staff room (they have solar panels and a generator feeding large lithium batteries) and a spare first aid kit. After the official welcome we were free to wander around the school grounds accompanied by excited children keen to show us their work. It was a very heartwarming experience to see how happy and enthusiastic the children are, all wearing their white shirts, some of which have probably been passed down from elder siblings. Kids from our fleet joined in an impromptu volleyball and football match, and Paul spent fifteen minutes or so throwing a rugby ball with some of the school kids. 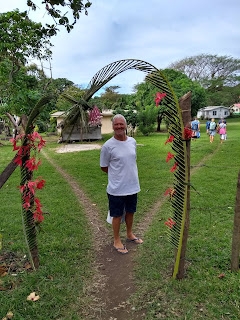 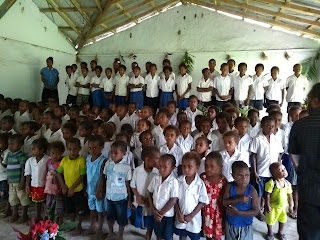 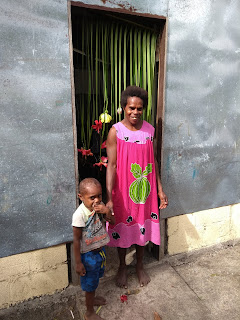 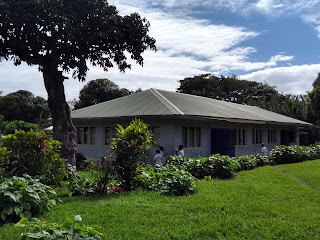 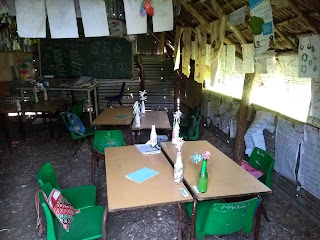 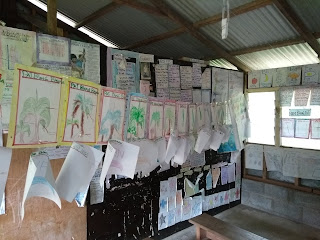 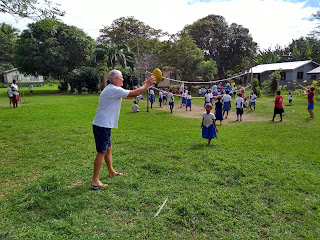 At midday we grouped around the village meeting place to watch the local villagers dance. Unlike their Polynesian cousins where the Hakka is the cultural dance, the style of dancing here was more reminiscent of Africa, with the grass-skirted women jumping up and down and the bare-footed men stamping the ground. It was fascinating. Once the dancing and formalities were over we all progressed along the flower bedecked pathway back to the yacht club where we were presented with hats (woven, you've guessed it, from coconut palms!), a flower necklace and fresh coconut with a reed straw. We were asked to sit on one side of the garden as the chief welcomed us and the children sang. We had then to introduce ourselves boat by boat, all being clapped enthusiastically by the villagers. 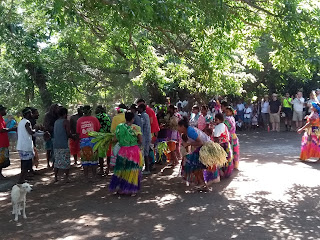 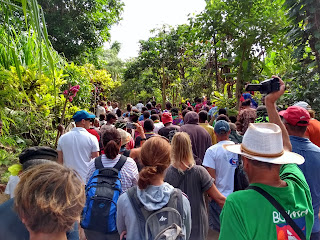 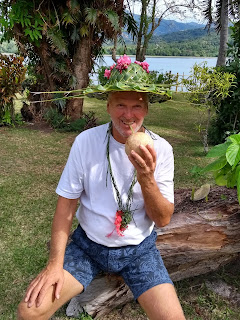 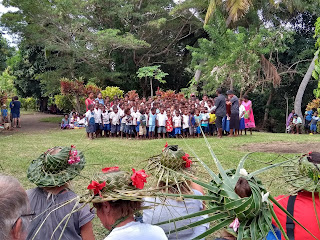 The primary purpose of the gathering was to exchange gifts and as each boat brought out their offering (we gifted spare towels and bedding, crockery and cutlery, lanterns, ropes, footwear and clothes, fishing tackle etc) the locals brought forward their gifts of woven baskets filled to the brim with fruit and vegetables (from the men) and intricately woven colourful bags (from the ladies). Everything was beautifully presented with flowers and feathers …. it made our offering in a selection of carrier bags and boxes, look rather scruffy. But the yachtie's pile of gifts was large and generous and the villagers seemed very pleased with the exchange. 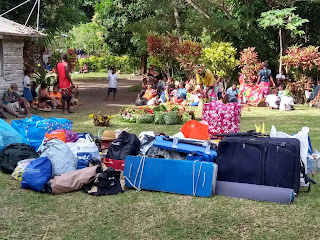 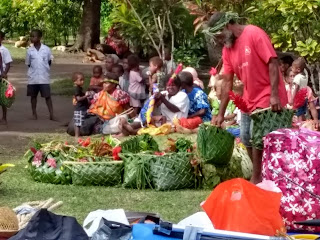 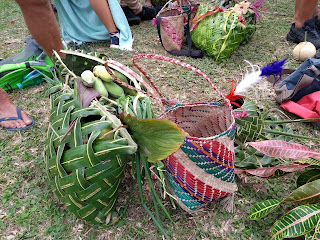 The chief closed the gifting ceremony with thanks and a long-standing welcome for us all to return before the ladies of the village came forward to distribute the goods between the sixteen different tribes (families) that made up the local villages. Interestingly the men weren't involved in this exercise at all and as the women opened the various bags and boxes it was fascinating to watch how they equitably shared it between piles for each of the local villages. A spoon here, a fork there, lantern on this pile, fishing reel on that. All done calmly and without the mad dash and clamouring we see at Boxing Day sales in the UK.


After a couple of hours back on our boats, we were back ashore at 6pm for the village feast at the yacht club. Two pigs had been roasted in our honour, along with fried fish and chicken wings, with myriad side dishes of yams, taro, breadfruit and leafy greens. A veritable feast of local flavours all served with a beaming smile.


We retreated back to Tumi around 9pm overwhelmed by the generosity and welcome of the Port Resolution villagers. Definitely a highlight of the whole trip and an experience we will never forget.