It was a slow old sail overnight, motoring in company with Chanto and Makara, but a fabulous sunrise as shown on the photo below. Despite our slow progress we still arrived a bit early for slack water and had to circle. But just before the magic hour we proceeded through the pass into the lagoon at Makemo, and despite only having a knot or so of current against us the waters were swirling making it quite tricky to steer on a steady course. Anyway we made it in without incident and are now anchored off the small village of Pouheva, home to about 300 islanders. It's a surprisingly together village for the middle of nowhere with good roads, proper houses, a big church and school and several small stores including a boulangerie, typical French looking after the bread and pastry essentials, hurrah! We'll spend a few days here before moving on to Fakarava.

Once again in the early hours a squall hit …. neither of us has ever seen sheet lightening so bright and frequent, lighting up the skies as far as the eye can see, nor heard thunder so loud. And as for the rain, torrential. It was actually  more of a storm, raging all around us and apparently moving along with us so we switched on the radar to check out the limit of the storm … a few miles wide so it took several hours to escape it.


We fully expected to have to motor all day but at 7am the wind picked up and we were able to sail once again. The morning proved to be very squally though and consequently the amount of sail we were flying had to be constantly adjusted. Chanto, one of the other rally boats, appeared on the AIS a few miles in front of us and over the course of the day we slowly caught up with. They, like us, are trying to time their arrival for slack water.


The highlight of the day was catching a large sail fish, maybe 6’ long. As Paul started to reel it in it thrashed around, jumping clear out of the water. It looked magnificent and we were both quite pleased when it spat out the lure and swam off. Interestingly the majority of our bites are just before sunset and tonight's was stunning. 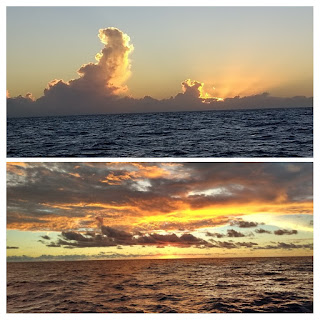 Now at 9.30pm we are still sailing, albeit very slowly. Makara, yet another rally boat is also nearby. We’re on track to arrive an hour before slack water … perfect timing.


Why is it that bad things tend to happen at night? A rhetorical question really but explains why at 2am this morning, just before Paul was scheduled to spell me on watch, a big squall hit us with high winds and lumpy seas. We frantically reduced sail and still made a very good speed. It lasted for 5 hours making for a poor night's sleep for us both. Typically by daybreak when you can actually see what you're doing it had passed over!


The wind dropped just before midday, very much as forecast and so now we are motorsailing along, setting our speed for arrival at Makemo at slack tide. Maybe we'll get lucky and the winds will return, but maybe not. If they don't then at least we've sailed 50% of the time which is infinitely better than motoring all the way.


Just before dusk we could see we were approaching another squall, the skies ahead looked almost black with heavy clouds, so we put the sails away, fitted the cockpit panels to keep us dry, fired up the radar to determine the narrowest point of the weather system and then motored towards it. As it happened we didn't get a lot in the way of wind and rain but with very light airs once we had cleared the cloud bank, we left the sails away and powered on with the motor.


We enjoyed an easy night, sailing along quite happily and averaging just under 7 knots as the winds held. During the morning they started to drop so we decided to get big blue out again and were making a decent speed in the light airs when disaster struck: a 40 knot squall came from nowhere and ripped big blue badly. We battled to get the shredded sail down in high winds, lying flat on the deck fighting to snuff the sail. It got caught on the wind generator and Paul had to cut it free, and then the retrieval line itself got knotted at the top of the forestay. Another cut needed but better than Paul having to be winched to the top of the mast.


So now with 350 miles to go we have no lightweight sail and a forecast of falling winds. We're managing to make a decent speed with the main and jib at the moment but as the wind drops we will have to motorsail if we're to make the entry time for the lagoon on the first island we plan to visit, Makemo. There is a one hour window twice a day to enter/exit these lagoons at slack water in the daylight and if you miss them you have to wait another 18 hours before you can try again. At least when we are motorsailing we can tailor our speed accordingly.


We were ashore bright and early this morning (think 6.30am) as there were rumours of tomatoes being available! Several other rally boats were there also making the most of the unexpected  opportunity to buy salad, something in very short supply. We also walked along to the boulangerie but by 7am they had already sold out! Fortunately one of the shops had bread so we did pretty well all told.


And then the discussions about the weather and the best window to reach the Tuamotos archipelago. We had hoped to spend a few more days in the Marquesas but the weather had a different agenda: two days (Friday/Saturday) with a modicum of wind and then nothing for a week so we took the decision to head off and by midday were on our way, along with a few other rally boats.


A few hours in the wind dropped so we decided to bring out the big blue parasailor. What a trial that proved to be. On the first attempt Paul somehow managed to get the lines wrapped around themselves and the sail was inside out! It was a struggle for him to get it down again but undaunted we got it up again, only for the wind to change direction so it came down again! Meanwhile our buddy boat gained 5 or 6 miles on us!