It's been a frustrating few days. We fitted two new solar panels on Saturday, U-bolted onto the existing frame. All went apparently well. I did the wiring from the isolator backwards to the solar panels. We have a controller to govern the charge to the batteries to stop them overcharging, the works. It should all have gone smoothly but unfortunately, it appears that something in the extra load of energy running through the electrical system has disrupted a circuit. The result of this is that our stand-alone battery bank in the bow has a power anomaly and the voltage has been fluctuating abnormally. This has triggered the power alarm on many occasions. Not good. The panels look nice though, as far as solar panels can look nice! 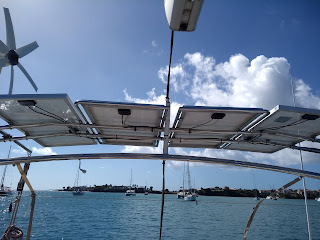 Anyway, three days later with input from fellow cruisers, lots of rewiring and insertion of two in-line fuses as isolators, and the charge going directly to the batteries, we seem to have settled the fluctuation down a bit. We are monitoring the situation but a local solar panel expert seems to think it should be okay.

On a good note, we needed to have an AIS transceiver for the world ARC instead of just the receiver we currently have. I fitted the new wiring yesterday, including a separate switch to be able to run silent without transmission in areas where we don't want to be seen. We needed a cross-over cable (120 eastern Caribbean dollars) to tmake a link to our existing network, but once installed, it was bingo! I scooted across to a neighbouring boat in the anchorage to find out whether they could see us and yes, a tick in the box. Something went well for once.

Tomorrow is US Thanksgiving lunch at the local hostelry, we are making brownies and roasted vegetables as our contribution. It will be nice to do nothing for a day.
Another good note is that we are nearly there with the canvas work and it's looking great. We have a dry cockpit area now which will be a real treat!

Somehow it feels that we are finally getting sorted. We still need a couple more things fitted and we are good to go sailing!!!