We have had a couple of relaxing days in the Berry Islands after leaving the Great Harbour Cay Marina. We had to motor around the top of the islands and in through a cut to nestle behind Cabbage Cay and Little Harbour Cay. There were two other boats already at anchor and we dropped the hook a reasonable distance from them in about 3 metres of water at low tide. Taking the dinghy to explore the waters between the islands we negotiated our way through shallows and deep channels, with turtles and stingrays galore scooting out of our way. It's surprising just how fast turtles can go when they want to, but equally refreshing to see so many in such a small area.

By the time we had returned to Tumi, another catamaran had dropped anchor next to us so we had company for the night at least. The couple on the catamaran next to us invited us over for sundowners, and Jane was playing her steel drum when we went across. Debra had a go, and did very well at it, with Tom and me accompanying on a scraper and rattle. Surprisingly a good sound!

We found a restaurant on the island (total number of inhabitants:3) called Flo's Conch Shack and we had lunch there yesterday with Tom and Jane from the catamaran next to us. As we tied up at the dinghy dock, three sharks (one adult, 2 juniors) started circling around the dock, obviously used to being fed with the conch and fish scraps.

When we booked the meal we were offered the choice of fish (snapper) lobster or conch. We both chose lobster, but when we polled up to eat, the choice was conch or fish only, so that's what we ate with coleslaw and rice and beans, true Bahamian fare. 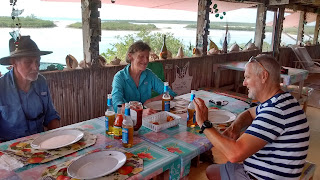 We ate far too much, and then as tradition demands left our legacy on the walls of the shack. 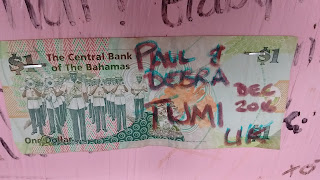 Back on board, there was no wind and it was really hot, so we both jumped in the water to cool off, a first for this season, now we just have to top up the tans!

Getting a signal to access the Internet has proved somewhat challenging and we have to try every angle possible to succeed ... 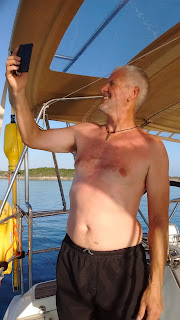