Our trip down from St Augustine to West Palm Beach was a journey of two definite halves. Despite the weather forecast saying that we would have northerly winds of between 15 and 20 knots, there was next to nothing, and we spent all of Tuesday motor sailing down the coast. On Wednesday morning at 1pm, the winds picked up (even though they were actually supposed to decrease according to the same forecast) and we were able to switch off the engine and actually sail. From that point, we averaged about 8 knots for the rest of the journey and really enjoyed the sail. We have come to the conclusion that the weather forecasts are rubbish everywhere. We arrived in WPB at around 4pm and we're able to pick up our normal anchoring spot in Lake Worth, just next to some really large gin palaces that are British registered. It's a bit like home from home seeing the red ensigns.

It's been a maintenance and shopping day today (and not just food shopping).

A few days ago when we were in St Augustine we had the heating system running in the evening and morning when the weather was a bit chilly. Unbeknown to us, a fender had draped itself over the heater exhaust outlet and it got VERY hot to say the least. 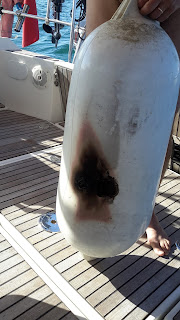 The fender was actually burnt through which is frightening on its own, how it never caught fire, we will never know, but we consider ourselves very lucky to have got away with it. Not just the fender was damaged, the hull obviously got hot too, and the gel coat cracked under the heat. The frightening thing is that if the fire had taken hold, our gas cylinders were right next to where it would have been ablaze. That would certainly have been the end of Tumi, and probably us as well. 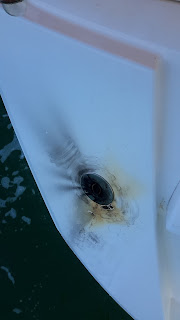 The area around the exhaust has been charred as you can see from the photo, and we decided to patch it up for the moment and get it repaired professionally at the end of the season as it will need greater expertise than I possess. 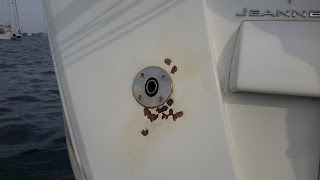 We started repairing the burnt and cracked part of the hull this morning, removing all the flaky bits of gel coat and sanding down the rough edges ready for the new gel coat application. The gel coat repair kit I already had was minus the hardener which had evaporated over the past year or so and that meant a trop to the chandlers ashore to get some new supplies. While we were in the chandlers, we stocked up on a few other bits and spares and then headed for the Publix supermarket to get some bananas. As usual, when you don't expect to see special offers, some buy one get one free (especially the mixed nuts) and bargains such as UHT milk at half the normal (exorbitant) price. Anyway, 157 dollars later, we had the most expensive bananas ever and had to get a cab back to carry them to the dinghy dock.

Speaking of cabs, we are really impressed with Uber - I downloaded the app onto my phone a few days ago and we have used it twice to carry groceries from the supermarket. Both times, the cars have been good, the drivers very polite and helpful and the tracking capability of the system let's you know exactly where your driver is. We will definitely be regular users going forwards.

Anyway, I have applied the first layer of gel coat this afternoon, will let it harden tonight, rub it down and put another layer on tomorrow morning. It won't be pretty, but it will do the job for now as we will need to haul out to get the work done and as our fridge and freezer use keel cooling, we would most likely lose our foodstuffs and we don't want to do that.
Newer Post Older Post Home