We travelled down yesterday from La Coruna, having had a boozy night with some new friends we made in the marina there. We set off at about 9:30am into the swell of the bay, rounded the corner and headed off towards Cape Finisterre. In our passage planning we had covered almost every eventuality: Wind from the north, wind from the south west, the south east and the south. Sadly, we hadn't covered the 'no wind at all' condition, which was just what we got. We motored all the way, with the exception of a brief squall that got up to 21 knots for a few minutes, then died out just as quickly as it appeared. Quite an expensive way to travel down the coast, and hopefully one that we won't have to repeat in the coming days. The passageweather.com website shows southerly winds from hereon out, so we can fly the spinnaker or pole out the jib (using the new whisker pole toy) and put a preventer on the boom on the other side of the boat and goose-wing our way down the west coast of Europe. Hopefully fruitful.

Crossing the millpond last night, we were kept company by several dolphins, attracted by the engine noise. Do they ever sleep? I have mulled that one over in my mind on several occasions. And how do they see in the dark under water to stop bumping into each other or boats? One to think some more about.

This morning at daybreak (about 9am here) we approached Baiona with the sea mist rolling along the coastline. I was beginning to think I would need the radar on to navigate into the harbour, but as it turned out, we could see well enough to spot the navigation buoys and went to the south of the south cardinal, and to the north of the north cardinal. From that point onwards, it was line of sight to our safe haven.

Having spent the day relaxing, we will have an early night tonight and be off at first light after refueling our empty tank! Depending on progress and stamina, we will aim to be in either Figuera da Foz or Nazare at the end of the next leg. We are trying to work out the best combination of watch sessions to suit our body clocks. We haven't got into the rhythm of sleeping when off watch. Something to work on before we burn out.

Over the past few days, I have been wrestling with the holding tank for the toilet - every time we have flushed the heads (loo) recently, there has been an indescribable odour emanating from the port side, and when you are in the cockpit, sometimes it can make you gag. So, I started to look into the problem.

I stuck a hosepipe down into the holding tank to try and flush out any blockage, and you would not believe the amount of crap that came out, but, more to the point, I was washing up gravel, some of it quite sizeable lumps. After teasing out a veritable mountain of the stuff, I decided to try and poke through from the other end ... under the boat ... and so donned my wetsuit and mask/snorkel armed with a stick to poke up the outlet hole. I was hoping to loosen more terminal moraine and force a way through but, nope, I met something very solid in the pipe that wasn't going to budge and I cut my foot right on a vein to boot!

There was only one thing for it - take the outflow pipe off the bottom of the holding tank and try to clear it of the blockage. Well, try as I might, all I succeeded in doing was burring the edges off the collar that tightened the outlet from the tank. At this point, I had to admit defeat, and called in a man. 2 hours work today (over a 6 hour period due to siesta time and other little distractions) and we now have a fully operational heads complete with holding tank that empties as it should.  You wouldn't have believed the size of some of the pebbles that finally came out of the pipe - there was no way they could have got into the tank in the first place without someone deliberately putting them there.  It's a sad old world when people maliciously damage other people's property.  We think / hope the problem pre-dates our ownership and we don't have any enemies!

While we were waiting around for the man to return after siesta, we made good inroads into cleaning the boat in readiness for departure on the 1st October which will be on the list of jobs to do tomorrow to finish what we started today. We have also worked out our passage plan down the west coasts of Spain and Portugal allowing a couple of days for some sightseeing in places we have never been before. But now, our focus is on getting back to Blighty for a couple of weeks before the next leg ... 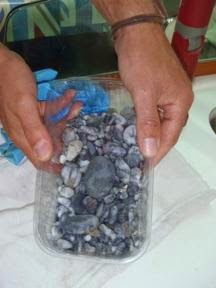 Some of the 'pebbles' in the pipe

Well, leg one of the journey is over. 90 hours of open sea, some of it rather rough and choppy, particularly in the waters north of Ushant. Thankfully, this settled down after a day or so, and we have been blessed with favourable winds for the rest of the trip down. Some queasiness aboard, but no-one needed to make any use of the chuck bucket, strategically placed in the cockpit.

Getting to grips with watch on / watch off routines proved a little testing, and we needed to be flexible when the next crew member to stand watch wasn`t feeling too god, but overall, it worked out well. As a crew, we all pulled together admirably, and I´m proud of everyone aboard.

It is only when you complete a crossing like Biscay that you realise just what it entails, and how few people have actually done it. Tick in the box for Debra.

A couple of little niggles cropped up on the boat mid-passage: The water filter cover split, and I had to by-pass it with a length of pipe and some jubilee clips. It seemed to work, thankfully - we would have been without pressurised water otherwise. It´s true that necessity is the mother of invention. One of the steering wheels developed a squeak which WD40 wouldn´t cure - I need to strip out the mechnism and grease it fully before the next trip southwards.

As for the present, we have a couple of days rest and recovery looking around the area. A mini holiday break!

Less than 5 weeks to go before we depart for the North of Spain and we have a crew member to join us on passage. That should make our lives somewhat easier - only two watches each per day instead of three.

The boat is almost ready - final bits and pieces to be fitted - lee cloths to keep us secure in our bunks, a galley strap to chain us to the cooker, and the freezer is a real bonus (not large, but apparently works well to maintain the temperature at -18C in 30C climates).

We have a Devon flag proudly fluttering from the port spreader to show where we come from, although most people won't have a clue what it represents. Those who do might get a prize!

We just spent a few days with our Danish friends, Hanne and Jens picking their brains about their recent return across the Atlantic from Chesapeake Bay - very useful. Debra is now on the case getting covers made for the saloon seats and making bean bag pillows as recommended by Hanne. We are also on the hunt for a whisker pole to allow us to pole out the jib when the wind is blowing from behind (which should be most of the crossing).

Phil (crew) is being put through his paces. We had a training session on Sunday with MOB (man overboard) practice, resulting in a broken boathook and some innovative method of retrieving the fender and bucket without one. It's amazing what you can achieve with an emergency tiller. 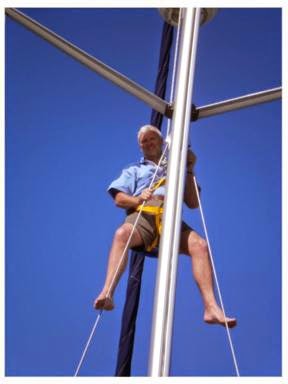 Skipper up the mast on a cloudless day in Salcombe Harbour

Hoping for a Summer so we can go sailing!

It's July already and we haven't really had any weather windows in which we can get out and sail. We are feeling very frustrated over this, but it has meant that we have been able to get most of the jobs done in readiness for our Atlantic and Caribbean odyssey.

So far, we have procured all the safety equipment we need, plus the most recent addition - a 1kw generator in case our batteries need to be topped up and/or our appliances need to be run on 230v supply. Only one thing left that is really important - the SatPhone. We are leaving this until the last moment to get the greatest advantage from the timed sim cards. I am learning more about the boat each time we go down to see her, and the jobs are being ticked off the to do list.

We also had a play with the spinnaker last weekend when we escaped for an overnighter to Fowey. It took us 3 attempts to get it right, but when we did, we managed 9 knots of speed from 11 knots of wind. We couldn't quite sail in the direction we wanted to, but we got the principles right, and having wrestled with the 'snuffer' a few times to close the sail and bring the big blousy red beast under control, I know that my muscles will be well honed before too long!
Newer Post Older Post Home